More results from the first season of the CABBA (working version...)
Survey work across the season
We officially opened the collecting season on March 15, April 15, and May 15, depending on location, as reflected in the plot below. We conducted most of our surveys in the summer months, the prime time for bumble bee activity. However, we may have missed some bee activity in the springtime by focusing on summer. One species that is relatively rare in our dataset that is quite common in the state is black tail bumble bee (Bombus melanopygus); this bee is active as early as January, and in most places disappears from the landscape by July. In 2023, we'll start surveys a bit earlier in the year to better understand where this species occurs. 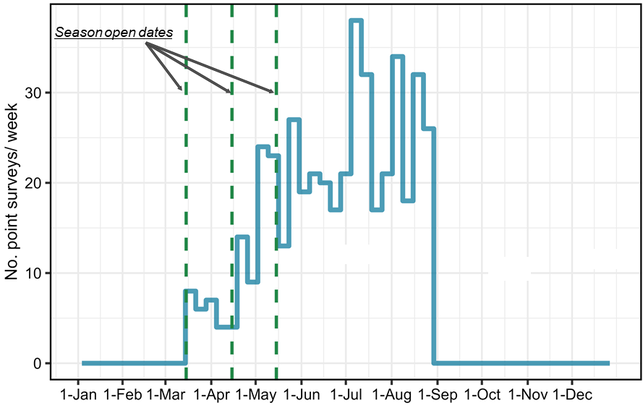 Our surveys consisted of 45 minutes of collecting effort, and most of us worked alone. Did it impact outcomes of the survey if multiple individuals worked for a collective 45 minutes? It did! In the graph below, you can see a significant positive correlation between the number of surveyors and the abundance of bees we collected. This probably means that solo workers miss opportunities to collect bees while they are processing specimens, which are less often missed when you bring a friend. We're not especially concerned about this effect, but it is worth keeping in mind as we interpret the California Bumble Bee Atlas survey data. (In this graph, we omitted a small number of surveys with larger numbers of observers.) 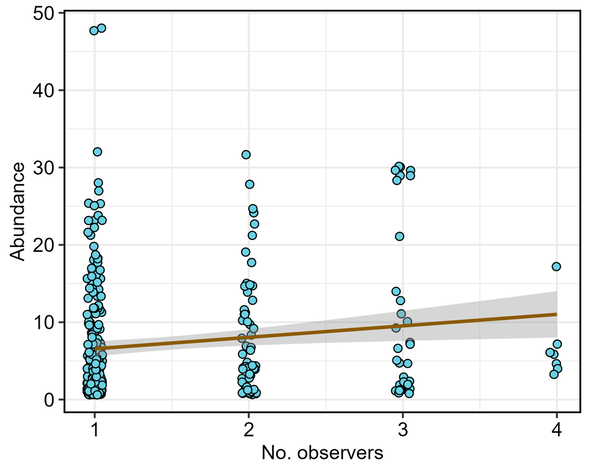 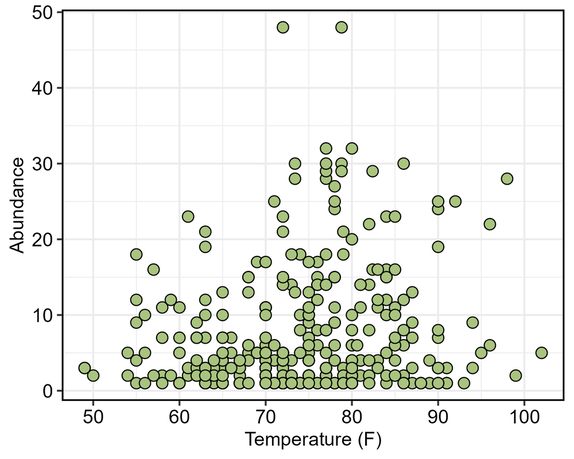 Effects of elevation
We found bees across a wide range of geography in the state. Were there patterns to where we found the greatest abundance and diversity? Yes! For example, we generally found higher species richness (e.g., diversity) at higher elevations. In the plot below, point surveys are plotted according to what elevation and longitude (i.e., west--east axis of the state) they occurred at, and diversity is symbolized by the size of the dot. The smoothing curve is the best-fit line for species richness across all data, and seems to emphasize the Sierra Nevada range (bracketed by approximate longitude), where we reliably found high levels of species diversity. 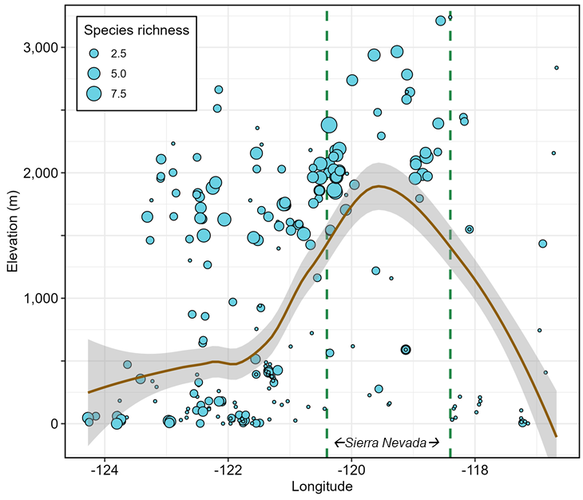 *These graphs use boxplots to depict our data, where the dark line is the median value, the box brackets the middle half of the data, the whiskers show minimum and maximum range of most observations, and black dots are statistical outliers. Where the box is missing, we don't have enough data (your surveys!) to calculate all of these statistics for a boxplot. We did not do point surveys in the Mojave or Sonoran deserts (southeastern corner of the state), given very low bumble bee diversity in these ecoregions, but we'll be sure to confirm this assumption about our deserts in 2023. 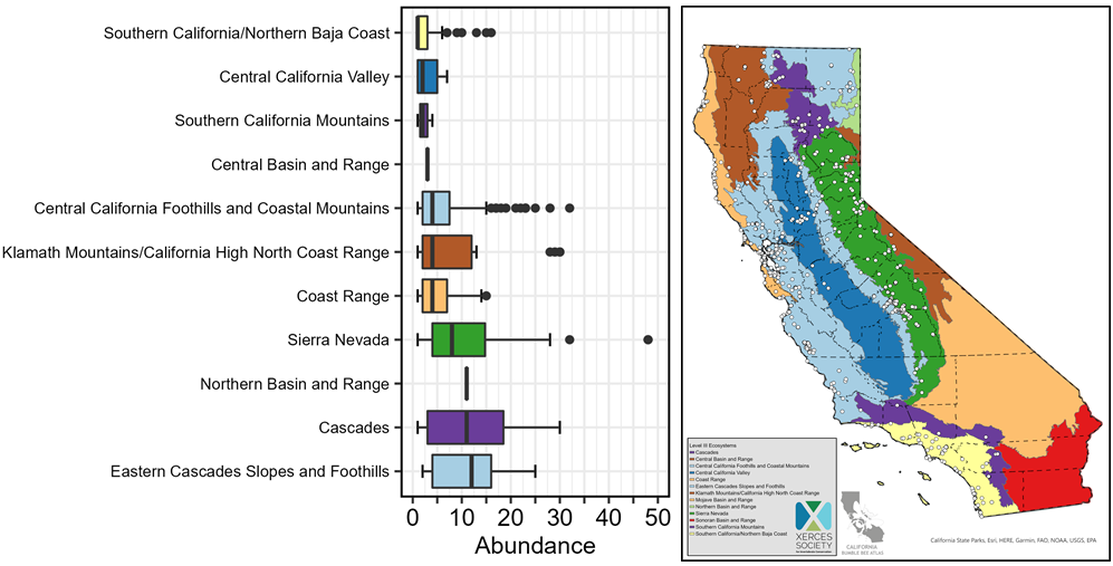 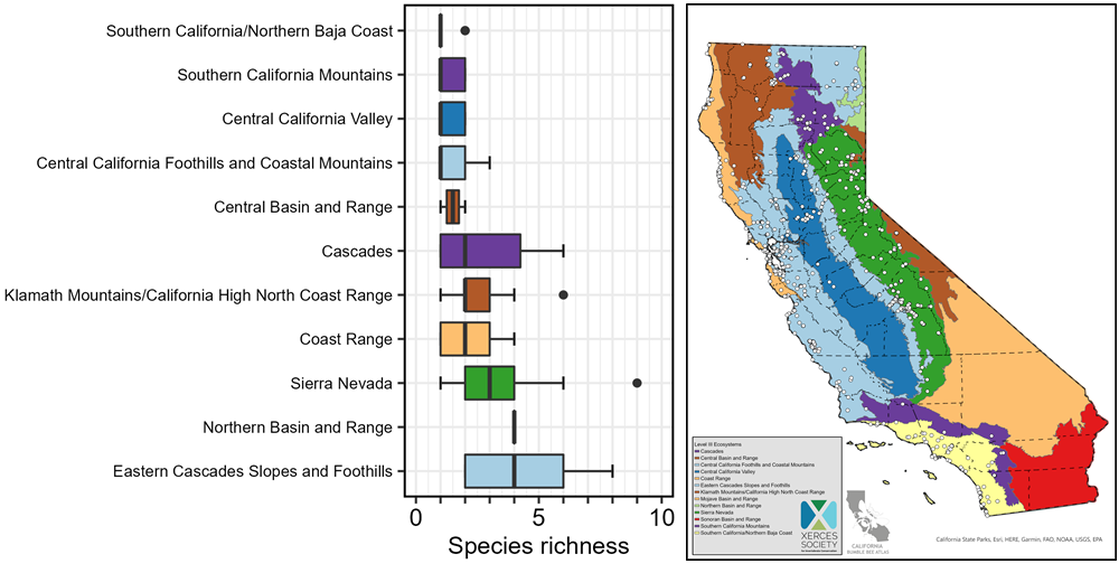 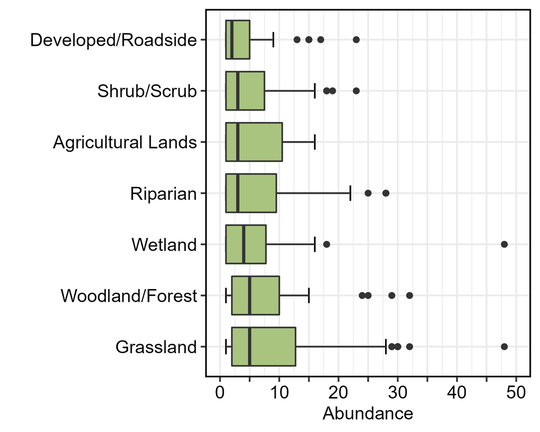 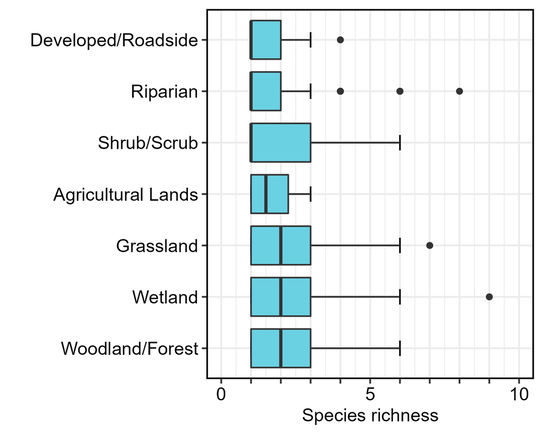 There are many other interesting patterns in our data! It's important to know that bumble bee abundance and diversity can vary between years, so it will be critical to also evaluate next season's observations alongside the 2022 data. Thank you for helping us to better understand California's native bumble bees! We could not have done it without you.